What are the Mushrooms of Seville?

With the official name of Metropol Parasol, the complex also known as Las Setas de Sevilla is located in the heart of Seville, a city in Andalusia famous for cultivating the local roots and culture. Seville is a Spanish city of ancient traditions and customs. With a great cultural richness, its historical center keeps an aesthetic that makes you understand who and how those who lived there centuries ago lived. 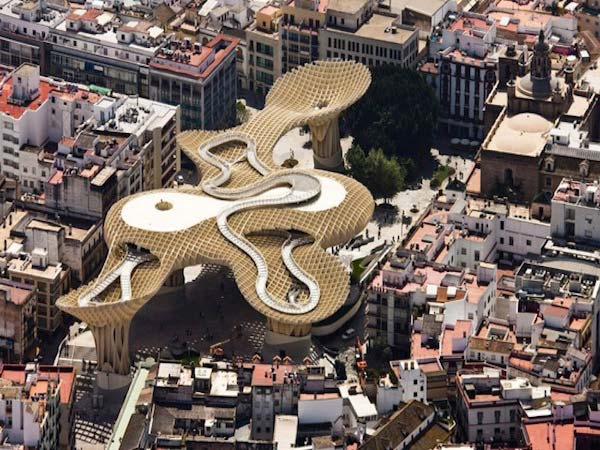 Precisely because of this, in the middle of the historical centre of the city, more precisely in the Plaza de la Encarnación, you can see the contrast of that new contemporary building made of wood, which encompasses the whole square, forming a great covering. That’s right, we are talking about the popularly known as Las Setas de Sevilla (whose real name is, precisely, the Metropol Parasol).

The project was carried out through a competition, in which a German architect named Jürgen Mayer was the winner, among other 335 projects.

Construction and structure of the Metropol Parasol

Las Setas de Sevilla basically consists of a complex supported by six concrete pillars, wrapped in a laminated wooden grid that is interlaced and joined to the upper part of the complex. Each one of these pillars has a different weft that, when joined, gives the impression that the whole set makes a wavy movement. Without a doubt, it represents one of the epitomes of the architecture of the city and even of Spain. And if you are in the city of Seville, it is one of the most important points to include in a complete itinerary. 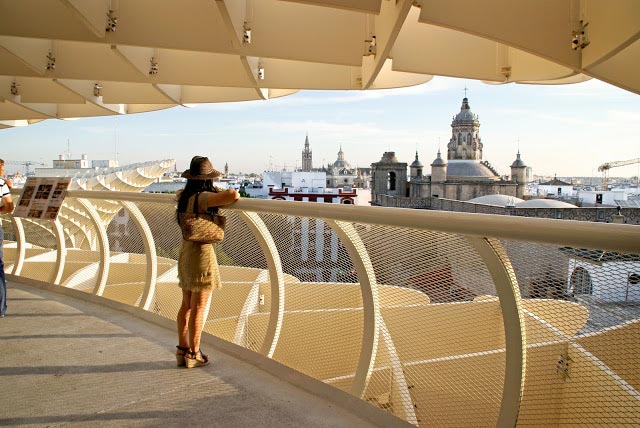 The construction of the building started in 2005 and did not finish until 6 years later, in 2011. The project of Las Setas de Sevilla had much more than one delay in its construction, which tripled the expenses that had been budgeted at the beginning. Even today, there are many criticisms and controversies about this superstructure in the city centre; both with the design and the material chosen, as well as questions about the costs to the city government; especially from the more conservative population.

An emblem of Andalusian tourism

In spite of this, Las Setas de Sevilla (Metropol Parasol) has already become one of the most emblematic tourist places of Seville, and we could even say of the whole Iberian Peninsula.

However, the idea of the construction of the building was precisely to bring a modern touch to the center of Seville, becoming a tourist attraction. Something that is undoubtedly already considered in this way today. What we can say is that the objective has been achieved, as the complex received one million visitors in its first year of opening alone. This number has increased over the years (and is expected to multiply in the future). 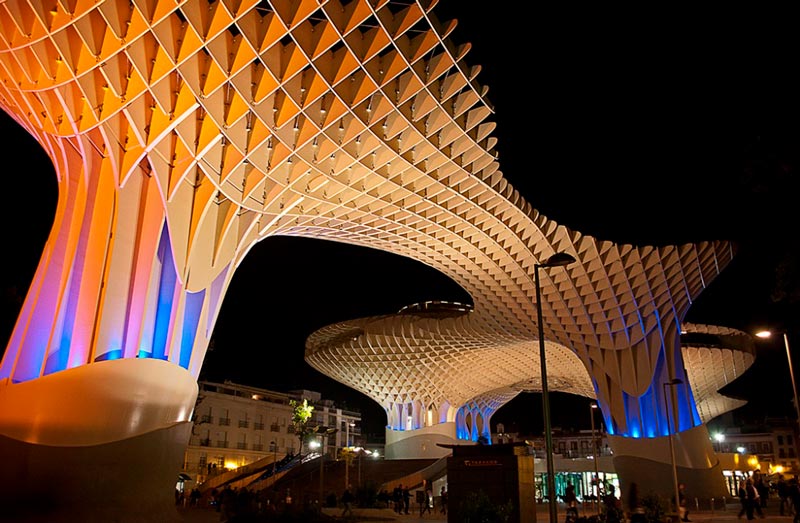 At the top of the wooden structure is a large concrete walkway, approximately 250 meters wide, where visitors can walk and appreciate the city from above on a 360-degree tour (remember, this is the best place for a panoramic photo of Seville). The complex also houses a market, a museum, a multifunctional space for events, restaurants and an archaeological space, with ancient ruins preserved. In short, it is a truly multi-thematic tourist attraction.

Criticisms and problems with the construction of Las Setas de Sevilla
Despite the architectural criticism, the Metropol Parasol is a great example that old and modern architecture can live together well, even indicating that contemporary architecture is designed to revive and bring more life to old architecture. What used to be a lifeless square is now the stage for meetings between citizens, tourists and all kinds of people. It has even become one of the most relevant cultural complexes of the Old Continent. It is proof that sometimes disproportion and unusual, or originality is the best solution to involve people in a forgotten historical environment.

Another of the most relevant aspects of Las Setas de Sevilla is that besides being an attraction with several floors and sidewalk options, it is the largest wooden structure in the world! As we mentioned, it was built with the purpose of renovating the Plaza de la Encarnación. Today, according to official figures, it is one of the most famous and visited places in Seville.

The site was inaugurated in 2011 by architect Jürgen Mayer with the feature of being the largest wooden structure in the world. The site is run by the construction company Sacyr and has five floors dedicated to different departments. The best thing is that in the last one there is a viewpoint, not very high, but that allows to have an incredible view of the city, especially in the evening. This is one of the walks you can take to escape a little from the sun (which in hot weather is usually quite uncomfortable), as only the last part is open.

On the first floor there are some very interesting tourist spots, as they are: The Antiquarian, the Archaeological Museum, an official arrow shop, a tourist information point of the city and access to the elevators.

On the second floor is the Mercado de la Encarnación and several restaurant options to sample some of the local cuisine (although prices do get a little high). If you are hungry or thirsty, it is best to eat something before, or after, visiting the Metropol Parasol.

On the third floor there is a higher square, ideal to enjoy the conviviality, observe the people and admire your own place.

On the fourth floor is the start of the visit to the Arrow Walkways, as well as an events area with an area of 500 square meters and a small bar that has an impressive view of the city. 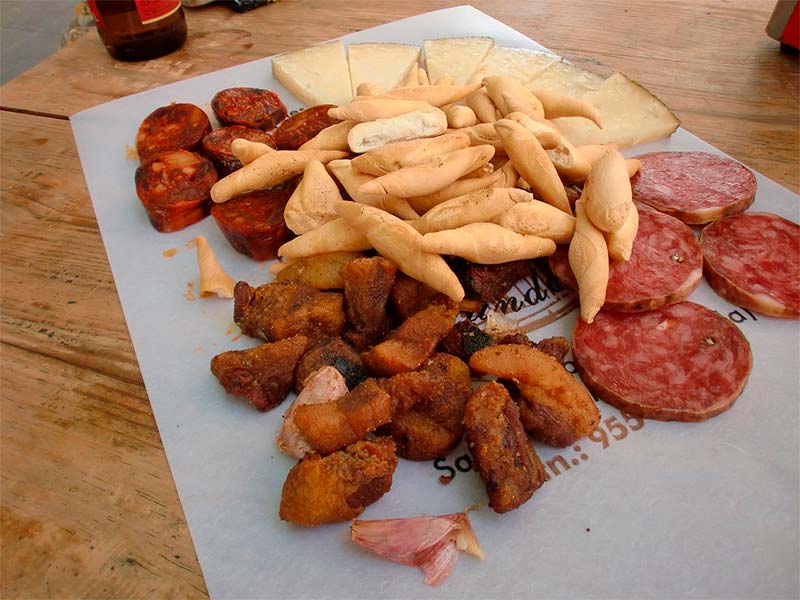 Finally, on the top floor of the tourist spot, there is a complex known as El Mirador. It is approximately 28 meters high, which guarantees a good view of the city and the tourist area of Seville, as well as some incredible photos to take a good memory back home (free if you have a mobile or camera).

If you are going to visit Las Setas de Sevilla, you can’t miss a walk around the Plaza de la Encarnación and other regions in the center of Seville; you can even start a walk to enjoy the characteristic neighborhoods of Triana.

Jewish quarter of Seville: a neighborhood full of charms and mysteries

Get to know the Seville Aquarium

What to see in Seville in one day 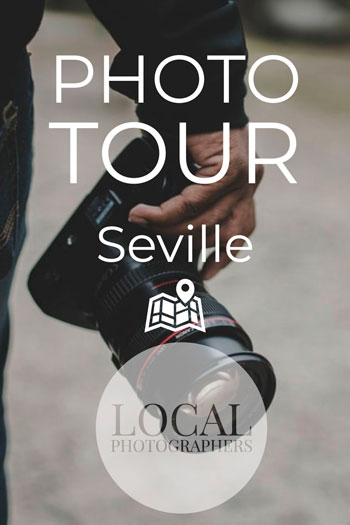 Where to buy car parts in Seville?

Seville airport parking: where it is and how to contact